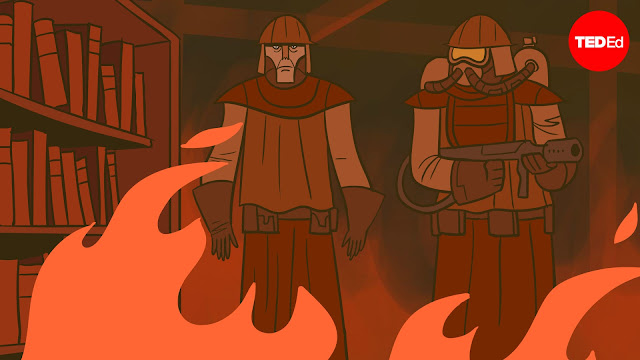 Summary
Fahrenheit 451 talks about a time in the future when books were banned as people think books makes everything philosophical and there would be melancholy due to this. People’s main entertainment is the high-technology parlor walls in their house. They are completely ignorant of the world around them and its problems and are not even aware of the upcoming war. Its hero Montag, was a fireman who burn books to prevent people from reading them. He set fire to people’s houses for years until one day he met his new neighbor Clarisse, who loved thinking and ask Montag questions. In a recent mission he met an old woman who insisted to stay, protect and be burnt with her books when the firemen came. These gave Montag a new perspective of the world. He started considering if burning books is a right thing to do and out of curiosity, he read his first. Later his act of reading books is reported by his wife to the police and he was listed as wanted. He escaped all the way to the countryside and met a group of renegade intellectuals, who try to rebuild civilization from the war by memorize one book each.

Quotations
“Do you ever read any of the books you burn?” Then she seemed to remember something and came back to look at him with wonder and curiosity. “Are you happy?” she said. “Am I what?” he cried. But she was gone—running in the moonlight. Her front door shut gently. “Happy! Of all the nonsense.” (Clarisse)

The woman knelt among the books, touching the drenched leather and cardboard, reading the gilt titles with her fingers while her eyes accused Montag. “You can’t ever have my books,” she said. “You can stop counting,” she said. She opened the fingers of one hand slightly and in the palm of the hand was a single slender object. An ordinary kitchen match. (the old woman)

Conclusion
Bradbury once described himself as “a preventor of futures, not a predictor of them”. I think a main reason he wrote the book is to warn people to prevent future to be like the one shown in the story. Book burning isn’t inevitable and it can be prevented by us. A lesson Bradbury taught us is that if people cannot accept ideas of others, the society will become a world of ignorance and prejudice.

Firstly, people will start to be ignorant if they are always closed-minded and cannot accept ideas of others. It was mainly explained by the fireman captain Beatty, which strongly agree with book burning. He explained: “Someone’s written a book on tobacco and cancer of the lungs? The cigarette people are weeping? Burn the book.” As everyone was offended by something in the books, so, burning them made it so that people don’t have to read “offensive” material and unhappy. However, in my opinion, if everyone is offended easily and could never accept an idea they do not concur with, they will be very ignorant, knowing nothing else than what they like. This will undoubtedly prevent people from being dismal in a way, but being ignorant is even worse than weeping. The idea can also be shown by the lifestyle of people in the story, which can be represented by the lifestyle of the fireman Montag’s wife, Mildred. The main entertainment of Mildred every day was the parlor walls, the big interactive screens in her (and everyone else’s) house that allowed her to play an interactive row in the story line of a drama: “‘I had a nice evening.’ ‘What doing?’ ‘The parlor.’ ‘What was on?’ ‘Programs.’” The conversation between Mildred and Montag shows that Mildred was so into the walls that she was not interesting and did not care about anything in the reality, which also means that she had zero experience of the reality. Einstein once said: “The only source of knowledge is experience.” This reflects that Mildred, and many others in the society in the story learns almost nothing from the parlor walls except from knowing the lines in the shows better.

Secondly, there will be prejudice towards the intellectuals if people cannot accept ideas from others. I think it is mainly out of two reasons. The first reason is autarchy and ignorant. People have no experience in the reality and they only have one kind of entertainment, which is the interactive walls. They were brain-washed everyday by the concept the walls wanted to deliver and this was very likely to make the way people choose what to believe in unreasonable and impulsive. Therefore, people are easier to be controlled by the actual person behind the walls, which is probably the government or a leader. They saw what the leader wanted them to see, heard what the leader wanted them to hear. When the leader did not want people to have “dangerous” thoughts from the books, he could easily infuse the idea to people through the walls. People could also have prejudice out of their own reasons. In the story, conformity is everywhere, people have the same perspective about things, the same routine, the same kind of entertainment. When they saw someone who think differently, someone who read books or used to read books, they would think that it is against what they agree with. The person is different. He did not fit in the society of uniformity. Clarisse was such a character. She was always curious and asked questions like “Are you happy?”. Additionally, her family walks instead of taking cars, talks instead of watching television. Thus, her whole family was seen anti-social. This shows how people were being prejudiced towards people that were different in some ways.

As a conclusion, Bradbury wrote this story to warn us not to be closed-minded to prevent the future shown in the story. Bradbury had predicted that book burning will happen within forty or fifty years, now more than sixty years passes and book burning have not happened. However, this does not mean that aren’t any closed-minds at all. We still face lots of issues such as racism and prejudice. We should encourage people to be creative and think outside of the box. We should support each other’s idea. We should try to listen to everyone’s opinion.