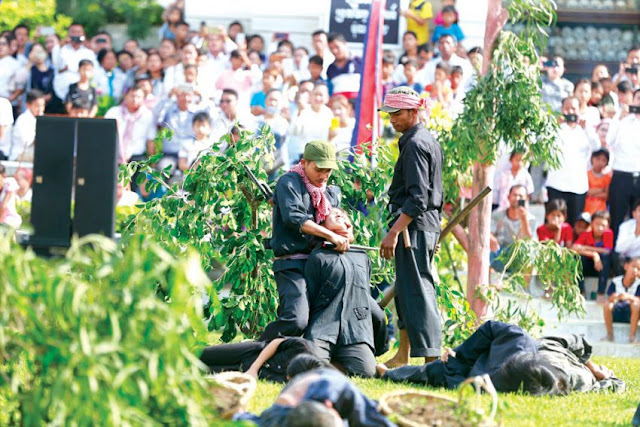 Yesterday, May 20, was the National Day of Remembrance, an annual event in Cambodia that commemorates the Cambodia genocide of the Khmer Rouge regime that ruled the country between 1975 and 1979. The Cambodian name of the day ទិវាជាតិនៃការចងចាំ is translated as “Day of Maintaining Rage”. The date was selected since it marked the beginning of mass killings in Democratic Kampuchea on May 20, 1976. 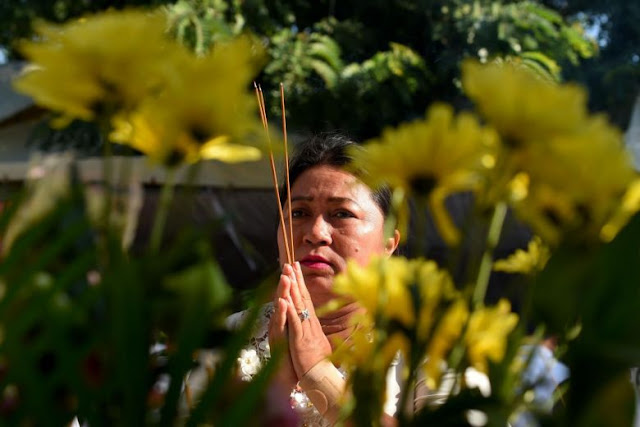 In Choeung Ek “Killing Fields” in Phnom Penh (the one I went to two months ago), many students in black went reenacted the horrors of the Cambodian genocide at the ‘Killing Fields’ on Monday to commemorate the two million people killed by the Khmer Rouge’s murderous, Maoist regime.

Student acted out the scenes of people being killed, children being separated from their parents, women being forced to leave their husbands and many other scenes showing the cruelty of the Khmer Rouge and how much the Cambodians once suffered from the genocide. 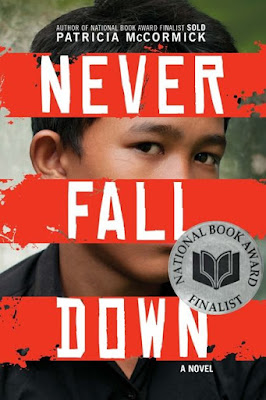 It was an emotional day. Many attendees cried when watching the scenes, as the actors pretend to slit open the victim’s throats and throw them into the lakes. Even though I did not see the scenes I could imagine the sadness of the atmosphere through the screen. The scenes reminds me of a book that I just finished on Friday called _Never Fall Down_. It narrates Cambodia under Pol Pot’s governing through the eyes of a boy named Arn, who was just 11 when the Khmer Rouge took over the country and forced everyone to go to the countryside. His struggles to stay alive by obeying everything the Khmer Rouge says, killing people from his hometown, and efforts he made to not lost his true self that always wants to help others, sharing his food with everyone. I feel sad a a bit scared while reading, half hoping that everything could go back to when Arn sings happily everyday, eating ice-cream with his friends, and half hoping that Arn could move on with courage and share his story to the world, letting more people to understand the Cambodians.

“These views brought my feeling back to the Pol Pot era, the killing was heinous,“ said 62-year-old Chan Ren, who lost more than 10 relatives under the regime.

“Today, people attend the event to pray to the souls of people who were killed by the Khmer Rouge,“ she added.

I once felt quite hopeless that no much people in the world know about the Khmer Rouge (In fact, I did not know it too before I went to Cambodia on the Tabitha trip.) , as it has been something that is rarely told even between the Cambodians. I afraid that the reason why Cambodia turned from the glorious Ankor empire into one of the poorest country in the world will remain a secret and Cambodians will be always seen as the lazy once and be discriminated. Today I saw the voice of Cambodia with my own eyes. I wish through the event, more people from countries around the world will know what happened during 1975 – 1979, understand what the death of a quarter of the country’s people was like. I wish the new generation could be more open and confidence to explain these to the others and lead the nation into a brighter future.