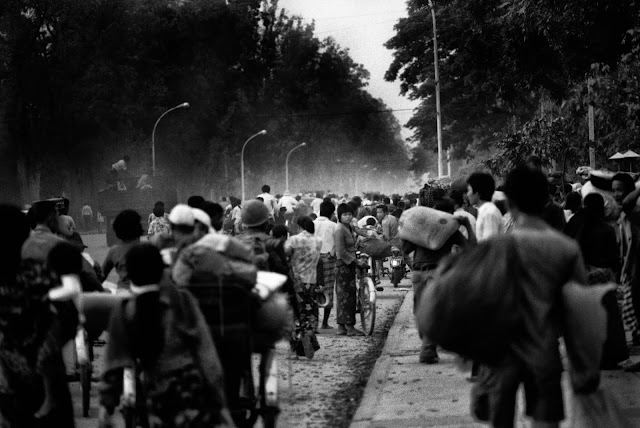 During their four years in power, the Khmer Rouge executed selected groups of people (like bankers, lawyers, teachers, doctors, etc.) who they believed to be enemies of the state or revolution. People who they perceived to be intellectuals or even those that had stereotypical signs of learning, such as wearing glasses, were killed. The official reason given by the Khmer Rouge for the intellectual cleansing was that they wanted to “rid the nation of it’s enemies”. They supposedly wanted to ensure that everyone was equal and that there were no social or oppressive classes. Those who had an education were considered part of an “oppressive class” and were executed.

I believe that the real reason that the Khmer Rouge executed those who had an education was to rid the nation of any potential threats to their revolution. Since those who had an education seemed the most likely to overthrow the regime, find ways to avoid the forced labour without being punished and coerce the population into protesting against the revolution (because they had the capability and knowledge to do so), they were the first ones to be executed.

In an effort to transform Cambodia (or Democratic Kampuchea, as the Khmer Rouge named it) into an “agrarian utopia”, the Khmer Rouge evacuated Phnom Penh by telling it’s inhabitants that the U.S. was soon going to bomb the city. Those who refused to leave were forced out or executed. By alerting everyone to the fact that, if they didn’t evacuate they would be killed, the Khmer Rouge had achieved the first step towards their ultimate goal: everyone was going to live in the countryside/provinces where they could cultivate land.

This tactic was probably used because it was the most effective way of moving the city dwellers to the countryside. After the Vietnam War, Cambodians were so afraid of the U.S bombing raids (because they had either experienced or heard about the ones that took place in east Vietnam), that they would do anything to escape it. This fear that existed within the population made it easy to arrange mass evacuations. Those who still refused to evacuate, which surprisingly consisted of thousands of people, were forced to march at gunpoint.

The Khmer Rouge did away with healthcare services such as hospitals and clinics because they wanted to work towards an fully independent agrarian society with no western influences. Since hospitals and clinics were western influences, they were closed down. The Khmer Rouge believed that in order to create a fully independent society, everyone must use traditional methods of healing and curing illnesses.

The Khmer Rouge also created a new calendar with 1975 as the “Year Zero” because they wanted to emphasize to the population the start of a new era, the beginning of a new Cambodia. In history, the Year Zero normally signifies the start of a new era where everything about societies is different: the culture, laws, religion, etc. The events before the Year Zero are normally not taken into account as seriously as the events that take place after the Year Zero. Since Pol Pot and his associates wanted the population and the rest of the world to forget the “old Cambodia” and only remember DK, he created a new calendar where 1975, the year when DK was created, would be the Year Zero.

Other tactics used by the Khmer Rouge in working towards a classless agrarian society included the separation of families and banning religion. They believed that parents were tainted with capitalism, which was a foreign policy that was against the policy of DK. Consequently, children were separated from their parents and indoctrinated in communism as well as taught the use of heavy artillery and torture methods with animals. Children were favored by the Khmer Rouge because their minds were the easiest to manipulate. Since children often practiced their knowledge from childhood in adulthood, the Khmer Rouge wanted to ensure that the new generation of people in DK would be educated in the principles of Communism.

All religion other than the Khmer religion was banned. Any people seen taking part in religious rituals or services would be executed. Several Buddhists, Muslims and Christians were killed for exercising their beliefs. Even those who came from foreign countries such as Vietnam or China were forbidden to speak their native language or practice non-Khmer religion.

A Letter to Jenny McCartney

A Letter to Jenny McCartney