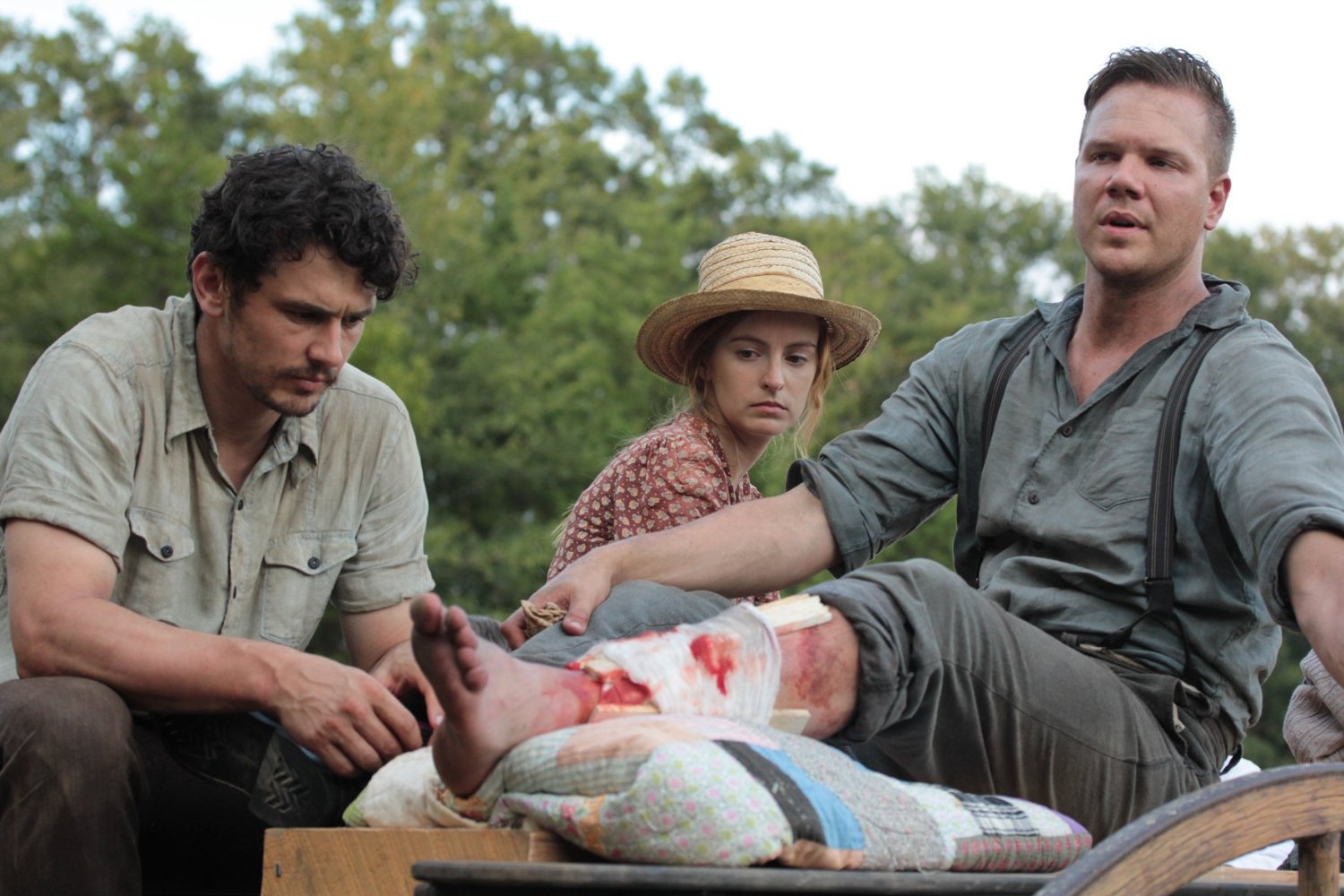 From whose Point of View is the novel written? (1st person narrator [from whose eyes and mind], 3rd person omniscient, or 3rd person limited?) Explain why this point of view is effective for this novel.

The Novel is written in first person point of view, but not of a particular person, but of a number of different protagonist’s successive interior monologues. There are lots of subjective opinions of events from each character, and there are also factual observations. This is very effective for this novel. Through showing the character’s thoughts and feelings, the readers can not only find out the facts about an event but also can experience the event in the way the characters went through.

List Four Characters and explain their importance or significance to the novel as a whole. (At least four detailed sentences for each character are needed. Mention character traits!)

1. Darl
Darl Bundren is one of the most important characters in the whole book. He narrates nineteen of the novel’s fifty-nine chapters. He was the second oldest child in the family. He was alienated by the community around him, and people found him strange and unsettling. Moreover, he usually found out private things about people around him. For example, Dewey Dell’s pregnancy and the secret that Jewel’s dad isn’t Anse.

2. Cash
Cash is the oldest child in the family. His leg was broken twice, once when felling off the church and the second time when he was kicked by Jewel’s horse when crossing the river on the trip to Jefferson. He was a carpenter and was making a coffin for Addie for the first few chapters of the story. He rarely spoke to Addie and showed his love to her simply by making the coffin.

3.Vardaman
Vardaman is the youngest kid in the Bundren family. He has a lively imagination. When Addie died, Vardaman catches a fish and starts to think about the concept of “death” for the first time when the fish dies. No one in the Bundren family tells him what death is and what happened to Addie, so he get confused between Addie and the fish and is keep thinking that his mother was a fish throughout the story.

4. Addie Bundren
Addie is the mother to Cash, Darl, Jewel, Dewey Dell and Vardaman. Her death triggers the novel’s action. Her life with Anse was loveless, which causes her to despise her husband and gives all of her love to her favorite son, Jewel, instead of the rest of the family or God.

Para 3:
Main Conflict or Challenge in the novel for the protagonist (main character): (Three – Four sentences)

The conflict of the novel is that Addie’s body had to be taken to Jefferson, her burial site. The Bundrens struggles from the forces of nature (the river that they had to cross) and internal conflicts (Darl’s decision to burn the barn out of some reasons). Both the external forces and internal forces made the journey to Jefferson challenging for the Bundrens.

Para 4:
Climax of the novel (the main turning point): (Three to Four sentences)

The climax of the novel is when Darl starts a fire in the barn and Jewel goes into the fire to save Addie’s coffin from being burnt. This action leads to the arrest of Darl and the end of the trip. Although the burial of Addie is supposed to be the climax, Faulkner barely mentioned it.

Para 5:
How the main conflict or challenge is resolved by the end of the novel: (Five sentences)

The conflict is resolved at the end of the novel when Addie’s body is transported to Jefferson and Anse gets new teeth and a new wife that he longed for. Almost all the goals of the journey are achieved (except that Dewey Dell did not get an abortion) so the story ends naturally.

1. Alienation
Alienation is a possible theme of the novel. The readers are able to know the feeling of all the characters. However, they never actually tell each other what they were thinking about. Addie was keeping all the thoughts to herself that only a clairvoyant like Darl knew that she had an affair and that Jewel wasn’t Anse’s son. It is the same with Dewey Dell. No one knew that she was pregnant except Lafe, Darl and herself. For Darl, he was quite rational at the outset of the novel when describing how Jewel and he himself walk home. However, he turns out to be insane and is sent to a mental asylum. This might be also caused by alienation. A possible cause of his insanity might be that he realizes the absurdity of the transportation of Addie’s corpse to Jefferson or that he finds out that everyone went on this trip for their own benefits (Dewey Dell wants an abortion and Pa wants new teeth and a new wife). If he had communicated more with the others and his family members were more willing to hear from him instead of considering him as a weirdo he would probably be normal and would have a smarter choice than setting fire to the barn.
2. Meaning of being and Identity of Self
In the novel, the meaning of being and identity of self was considered again and again by Darl and Vardaman. Vardaman is getting confused between things that are now existing and things that existed, in other words, things that are being “is” and “was”. This is a reason why he did not understand why he could not be united with his mum after she died. Darl was confused by the identity of the self. He was comparing the difference between Jewel and he himself even before he went to bed: “I don’t know what I am. I don’t know if I am or not. Jewel knows he is, because he does not know that he does not know whether he is or not.” He was always pondering and interrogating himself, which leads to his madness and at last he was sent to the asylum.

Para 7:
Name three literary devices the author used to help make this novel meaningful and interesting and explain how and where they are used in the novel and SPECIFICALLY WHY the use of this literary device enhances the meaning of the novel. Cite two specific examples from the novel where these literary devices are used. (include page numbers) Literary devices include: symbolism, foreshadowing, flashbacks, irony, diction, figurative language, creative/realistic imagery, satire, syntax, persuasive/rhetorical devices,

1. Symbolism
Symbolism was a literary device used in the novel. There are a lot of animal symbols, for example, horse and cow. The horse symbolizes the freedom Jewel had from the family. Firstly, to buy the horse, Jewel worked at night secretly for a long time to earn enough amount of money. During the time, Addie asked other children to cover his works for him. This is a sign that Jewel gained freedom — he did not have to do housework. Also, before crossing the river, Jewel was “riding on ahead on the horse”. This also shows his willingness to gain more freedom. The use of symbolism shows Jewel’s personality in a vivid way.

2. Monologues
As the book was written in the first-person point of view of several characters, it has many subjective opinions towards an event. For example, in Chapter 4, Darl was standing on the side of Addie’s bed. He appeared to be indifferent towards his mother and the three-dollar load. However, in Cora’s perspective, Darl was a loving son and his heart was too filled with words. Such use of literary device shows not only how the plot goes, but also the inner thinking of the characters and the relationships between them.

3. Repetitions
There are many repetitions in the novel. In the first chapter, repetition was used to vividly emphasize the noise Cash made when making the coffin: “Chuck, chuck, chuck.” Also, in Chapter fifteen, Vardaman asked a few questions to Cash: “Are you going to nail her up in it, Cash? Cash? Cash?”, and “Are you going to nail it shut, Cash? Nail it? Nail it?”. These question and repetitions show the innocence of Vardaman and the worry and unbelief inside his heart, as no one told him what happened to his mother. This also shows the Bundren family’s lack of attention to Vardaman.

Para 8:
Choose two quotes from the novel, write them down, AND the page number, and explain how these quotes are especially meaningful or significant to the novel’s themes or to the development of character. (At least 4 Sentences for each)

1. “What you got in you ain’t nothing to what I got in me, even if you are a woman too”
This quote is from Dewey Dell before she milked the cow. It is meaningful because the cow moaning due to its swelling udder symbolizes Dewey Dell. She was pregnant and was worried that other people might find out about it. She was trying desperately to get an abortion from the doctors but no one wanted to help her and she was just given a placebo. Dewey Dell’s worry was very much like the cow that mightily wanted to get the milk out and this leads to her strong approval of sending Darl, who found out about her pregnancy, into the mental asylum.

2. “Meet Mrs. Bundren,” he says.”
This quote marks the most ironic scene in the novel. Anse borrowed a shovel to bury his wife Addie, the next day he was married to the woman whom he borrowed the shovel from. The quick replacement of Anse’s wife suggests that the entire was an effort to replace Addie and that that family is just a set of roles to play, rather than a true unit of people. This also shows Anse’s selfishness, which might be caused by poverty.

Para 9:
In 8-10 sentences, explain why you would or would not recommend this book to others: (Please spell the word recommend correctly. ) Be analytical and specific – Do not say: “because this book was exciting” or “because it was a good book” …) Mention how this book relates to your life…how has it inspired you…with what character do you most identify…strengths and weaknesses of the novel…etc. Use PROOF from the novel to back up your assertions.

I would not recommend this book to others. It is interesting to read a book that reflects the life of a poor family in the 1920s that is written as a series of stream-of-consciousness monologues, but it is just quite confusing to understand. As all the chapters are monologues, they never start with names. Instead, the characters in the chapter (except the narrator) were all mentioned as “he” and “she” starting from the first sentence, and readers will have to think hard about which character can possibly be that “he” or “she”. For example, Chapter 49 begins like this: “Against the dark doorway he seems to materialize out of darkness, lean as a racehorse in his underclothes in the beginning of the glare.” A “he” was mentioned but readers were unable to know his identity from this sentence. Furthermore, the word “he” was used for half of the chapter and the readers still did not know his identity. I believe that stream-of-consciousness monologues were to let the readers feel that they were the narrator in the chapter and were experiencing what the narrator has experienced, but instead, this style of writing just causes more confusion. Overall, the book is very interesting, but readers have to put lots of effort into understanding what was happening. Therefore, I would not recommend this book to others.

As I Lay Dying: "My Mother is a Fish"

As I Lay Dying: "My Mother is a Fish"