Notes: I copied journals of the first three days to Dubai from my mum’s blog, but this post is originally composed by myself.

——
In the morning, we went to Palm Jumeirah, an artificial island sticking out from the mainland. The creation of it started in 2001 and finishes in 2011. To have a better view of the whole island, I used google maps and zoom out, finding out that the whole island was in the shape of a palm tree, connecting the mainland on its trunk. There are also two other artificial island. One of them was consisted of lots of small island, forming the shape of all the continents in the world. The other was in the shape a bigger palm tree (I still think the small palm island was more delicate. It probably costed a lot of money and natural resources to build all these things in Dubai: The tallest building, artificial island, etc., but it was actually very effective in attracting tourists from all around the world).

Atlantis was not an unfamiliar name to me. Months ago, Allie and me watched a movie called Aquaman together. Atlantis, in the movie, was the name of the sea kingdom. It was once a glorious kingdom on an island, everything was made out of gold, silver or ivory. However, Atlantis was not the only civilization at the time. Lemuria,  another hypothetical civilization, bombed Atlantis. The whole island sank, people in the kingdom evolve and were able to live in the ocean.

After researching, I found that the background information of Atlantis in the movie was actually based on a hypothesis of the Greek philosopher Platon. The hypothesis was famous over the theorists and authors. The elements of the hypothesis was found in different cultures of different time periods.

I thought that the movie”Atlantis” and the Dubai “Atlantis Luxury Hotel” were two separated things, and it was just a coincident that they have the same name. However, as we walked into the aquarium next to the hotel building, we saw this: 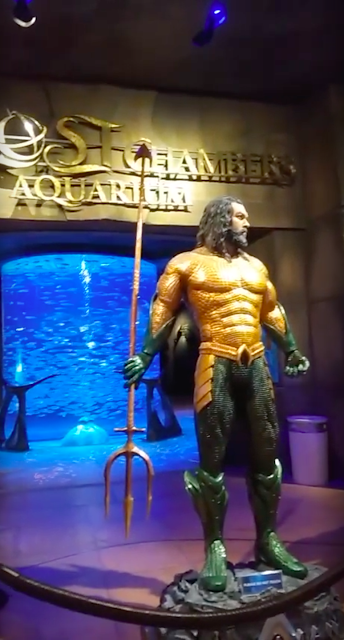 Which reminded me of this: 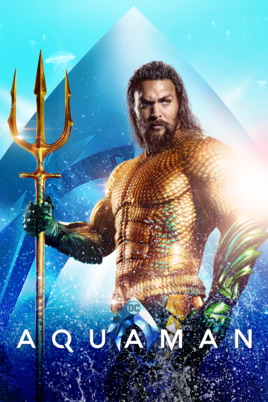 They were actually the same thing! But as I know, Atlantis aquarium was opened for years already. Perhaps Aquaman was inspired by this sculpture and invited the actor to cast Aquaman for them?

I was really not sure, but we still took some photos: 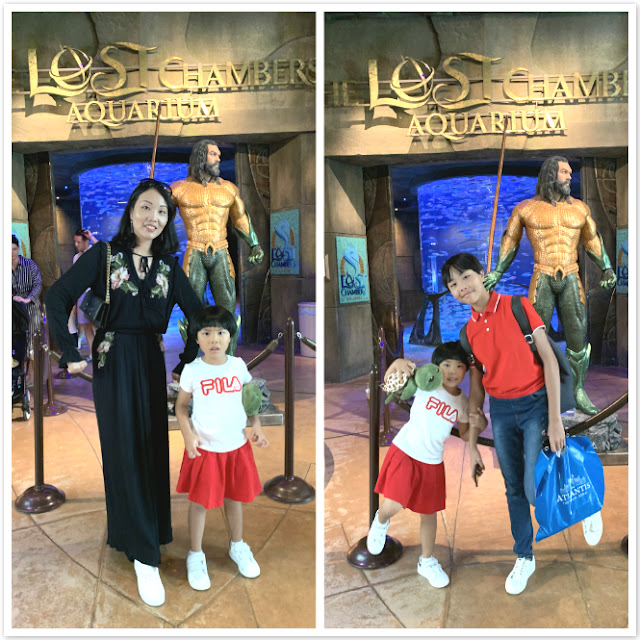 While dad was buying tickets, Ariel was attracted by a video on the counter, with some tourists playing with sea animals such as seals, penguins and killer whales. I took a look at it and found that it was actually a virtual reality video. The animals were all added into the video later and all the tourists had to do was to act, as if there are actually animals there.
Acting time!

The polar bear:
Ariel reacted so fast and kicked it on its head!

Playing with the dolphins!

And a close contact with a seal! (Now everyone expertized at acting)

Comparing to the aquarium in China or in Singapore, this one was so much more delicate. It was not that it had more fish in the display area, but that it was more well-designed. For example, the whole aquarium has a theme of the movie Aquaman (again, I have no idea why these two are related, but there were lots of  special designs in the fish tanks such as the helmets wore by the main characters when they were in a competition, the costumes of them and the weapons they used for fighting). 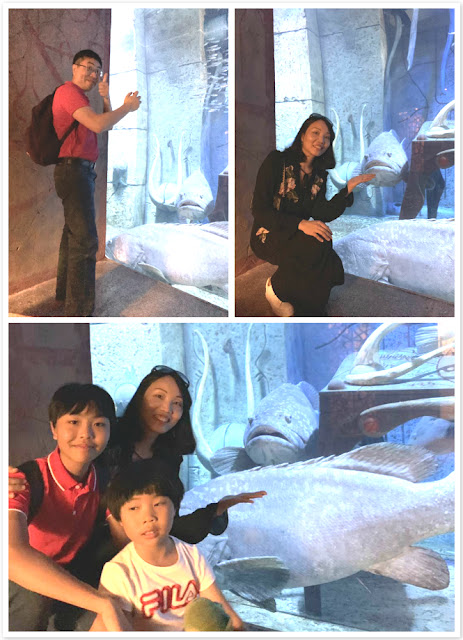 See that helmet with two sharp thing sticking out? That was the costumes of the bad guys Aquaman’s brother hired to catch Aquaman (Ariel cried cuz she lost when playing a game with me)

The point was not the sea eels (still they are very lovely, there was a really thick one that couldn’t get into the holes). It was the holes they rested in. I remembered that this is also an element from Aquaman, in the great castle where Aquaman and his brother first met.

Ariel saw a fish that looked exactly like Gill in Finding Nemo. She kept on yelling “Gill comes! Gill comes!” in Chinese and everyone laughed.

We had travelled around the whole aquarium. Ariel went to the souvenir shop. Arial chose a turtle (we went back to hotel and found that the hotel had a gift for us, which is also a turtle of the same size). 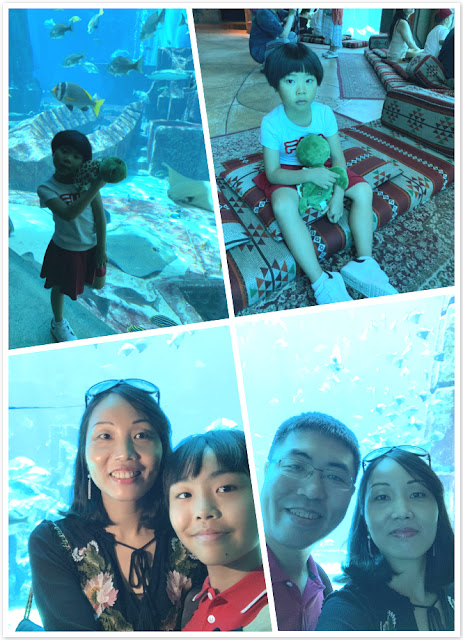 We got out of the aquarium and headed straight to find a restaurant. Finally we went to an Italian one. I had lasagna and Ariel, as always, had pasta. However, my lasagna somehow was really salty and no one could eat it, so we order another Spaghetti Bolognese and share. 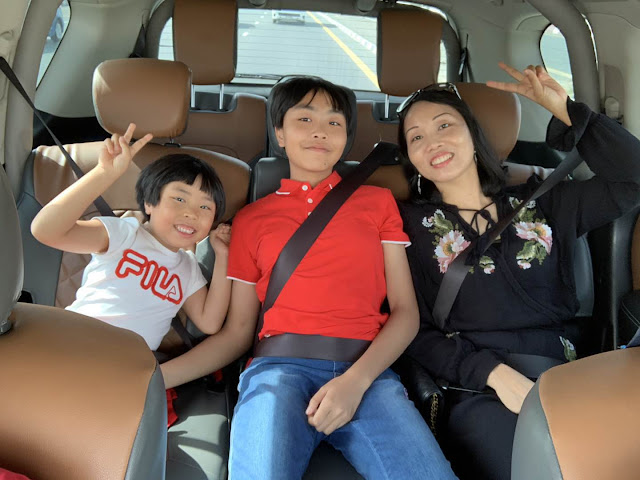 We got on a car, going to DESERT SAFARI!!!
Desert Safari was a famous activity, popular over both the tourists and the locals. It was to drive a special off-road vehicle and travel on the sand dunes in the desert, going up and down the dunes as if riding a roller coaster.
The car we sat in the image above was not a simple car, too. The driver told us that it was designed for desert safari and even if we lost control, turned upside down or bumped onto a dune, we would be save.
(Then I asked if this could prevent car crashes on the roads, the driver said: “… Hmm. Only on sand…”)

There were almost no cars on the road so we always got to slow down to observe things. For example, when I saw a building with letters on the top that says: The Camel Hospital, I was actually shocked, imagining a hospital with camels as doctors. Then I realized that things weren’t what I imagined…

On the way we saw some camels in training. The camel trainers were riding adult camels on the left side, and there were the young new camels, only two years old in average, on the right side. They looked almost the same as the adults, except that they were shorter, had smaller heads, and that they do not have the cuts and calluses on their legs.

We finally got to a station. Lots of other people who went here for Desert Safari also stopped here. Every one had to wait, until we were told to go (perhaps when the last group of people who went left). While we were waiting, Ariel and me bought two scarfs. The person selling it could speak Chinese (probably an autodidact, meeting so many Chinese tourists everyday)!

Onto the sand dunes:
The driver stepped on the accelerator and the whole car rushed forward. The sand we travelled in in the beginning was quite flat. The driver turned left and right to help us getting used to the temperature in the car and being prepared for the dunes.

We went in front of a dune. Comparing to the dunes we saw at the station, now they seemed to be so huge, so tall that we could not see what was on the other side. Accelerator. Vroom. The whole car was tilted, with the front part of the car pointed directly at the sky. Then I screamed. Loud scream. I did not know how and when the car would got to the top of the dune and turned head down. The unknown dragged me into the abyss of fear. A stop. A stop that was so long that I got to realize that this was the calm before the storm. Damn it, go please!!! It went. Head down, diving down from the dune that created an almost-80-degree angle. Phew. We finally went pass the dune! Oh no, there was another…

We went pass hundreds of dunes, and was a little bit used to it. I stopped screaming, and dad and mum stopped thinking (and screaming) that the car would turn over. But then every one got a bit carsick. We found a pause point and get off the car. 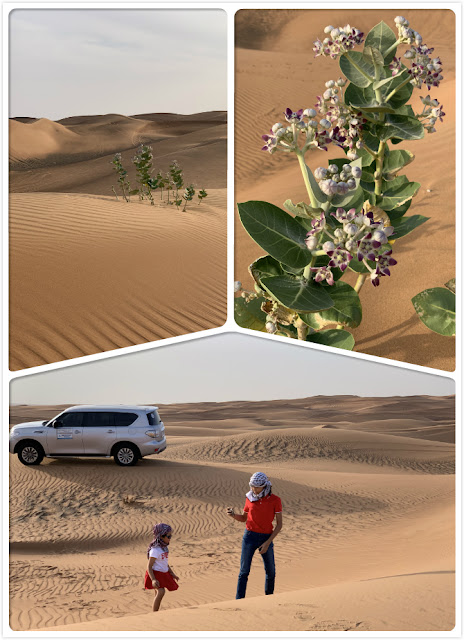 We finally got to a stop point in the middle of the dessert and started walking in the sand. Ariel and me started playing in the sand. The sand here was very different from the sand on the beach. It was much softer, much smoother and finer. This means that after we sat on the sand and got up, there would be lots of tiny sand particles stuck on our trousers and not getting off even after the trousers were washed…

Sand here was also hotter. I took off my flip flops and tried to submerge myself in sand. I regretted the second I did so. The sand was burning. It seemed that it could not only cook an egg, but also an omelet. I tried to put my flip flops back on, but the harder I tried, the deeper it went into the sand. This was the worst moment of the day.

Photo time! The red clothing we wore really stood out from the sand and did not absorb heat. 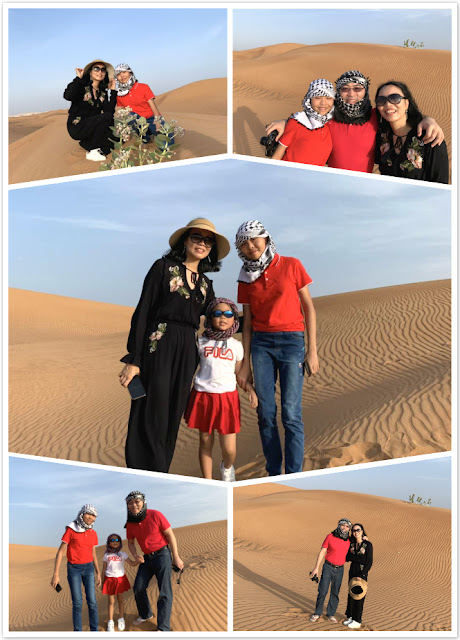 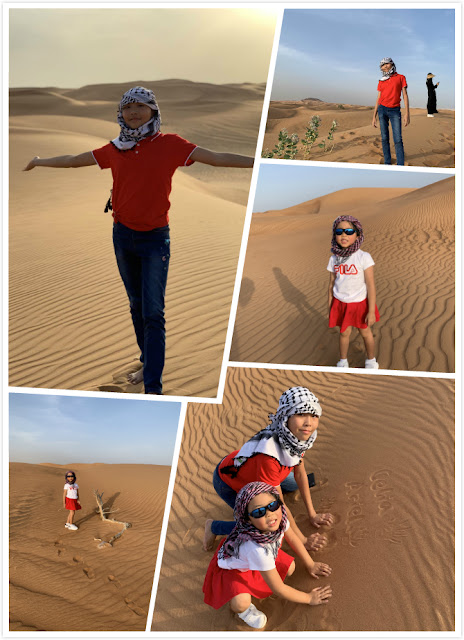 I decided to use this image as my profile photo: 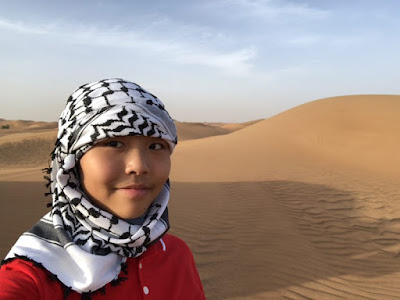 Heading to a camp in the middle of the desert 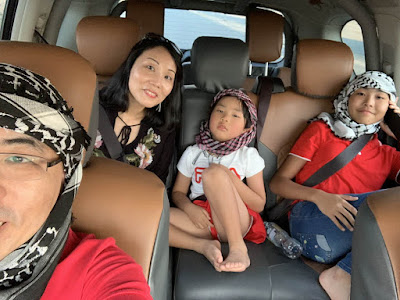 Ariel was suddenly got mad cuz her sandals were full of sand. But it’s fine. We would reach the camp in a few minutes. 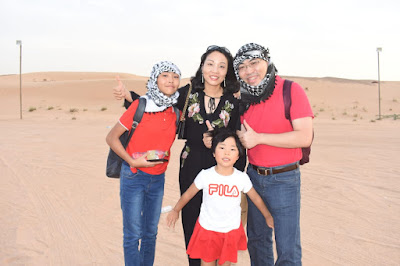 The camp took a photo for us with a camera, but it looked a bit like those kind of faded old photos. 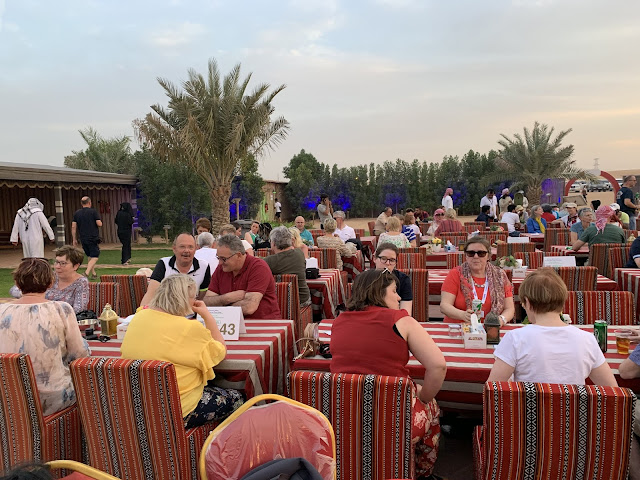 There were lots of people in the camp already. The “camp” seemed to be kind of simple and crude — there was only a few tables and chairs. However, this was actually a kind of luxury in a desert — all the floors were covered with bricks, grass was planted and there were also a few trees!
Dad went to take some drinks, and then a guy in white robes came. He was holding a falcon, the national bird of Dubai, and called people to take photos with it. 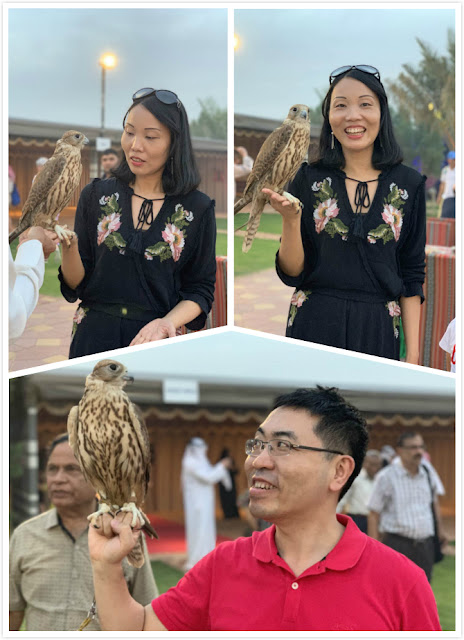 This was the first time that we saw a falcon, so all of us took photos with it. 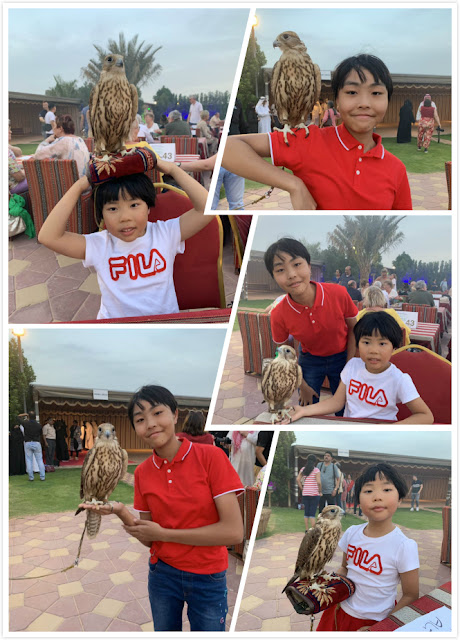 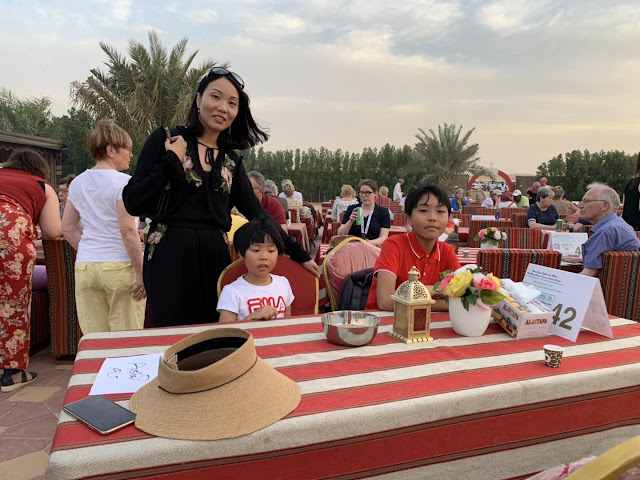 (It was too hot and I wasn’t feeling very well) 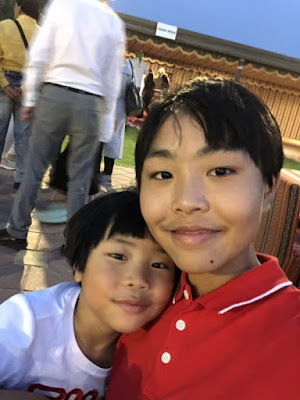 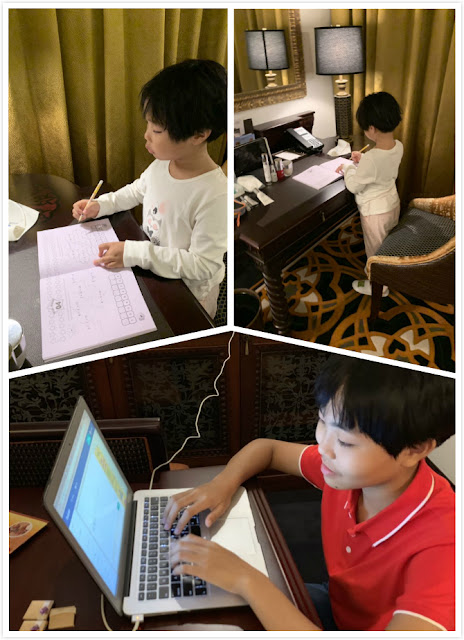 Back to the hotel finally! Ariel started her Chinese time and I started on my SAT vocabs. This was such a full day!

What if an asteroid was about to hit Earth? Scientists ponder question

What if an asteroid was about to hit Earth? Scientists ponder question