By Will Ross BBC News, Ghana 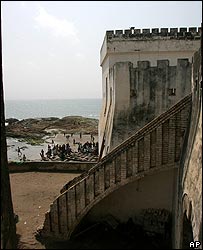 About 12m Africans were forced onto European slave ships

Between the 15th and 19th Centuries, it is estimated that up to 12m Africans were forced onto European slave ships and taken across the Atlantic.

Two hundred years after the British parliament voted to abolish the trade, the effects on Africa are still being felt.

Head to a village in northern Ghana or indeed many villages in West Africa and at times you might wonder what century you are in.

Even though Ghana has achieved impressive growth rates in recent years, the scene in many rural areas appears to have changed little with grass thatched mud walled huts.

There is often no electricity and yes, the water is collected in plastic containers these days but it is still quite an effort to fetch it.

The Ghanaian historian and lawyer, Mohamed Shaibu Abdulai, says Africa’s loss of millions of the strongest men and women during the slave trade is one reason for this underdevelopment.

“The slave trade actually prevented the coming into being of an agrarian revolution in Ghana, and likewise an industrial revolution. Because before you can industrialise you need to have stable agricultural production. So slavery has a very long effect.”

Some estimate that without slavery the population of Africa would have been double the 25m it had reached by 1850.

“During slavery many of the able-bodied people, between 18 and 40, were taken out so society’s ability to reproduce itself economically, socially and culturally was impaired,” says Zagba Oyortey a Ghanaian cultural historian.

Another legacy of the trans-Atlantic slave trade was the fuelling of conflicts and long lasting rifts between communities which in some cases remain.

INTERACTIVE MAP Follow dynamic trails across Africa, the Caribbean and the UK with text, images and audio to explore the abolition of British slavery
Interactive map

The European demand for slaves provided a lucrative business for the African slave raiders in the interior.

Many of the slaves were prisoners of war, and enslaving an enemy soon became a motive for going to war.

“European traders found it hard to get slaves during times of peace. However, when there was war, gold was scarce and slaves were widely available,” says Doctor Akosua Adoma Perbi, the head of the history department at Ghana’s Legon university.

“One traveller wrote in his memoirs that in 1681 he had got only eight slaves after combing the whole of Ghana’s coast from west to east. But when he asked why that was, he was told the people were at peace.

So warfare was a major source of slaves.

Doctor Perbi has written a book on the history of indigenous slavery in Ghana which, she says, was affected by the trans-Atlantic slave trade.

“The greater demand for slaves for the external market resulted in an increased tapping of the indigenous sources of slave supply. This period of great demand for slaves also coincided with the introduction of guns and gunpowder into Ghana. Incessant wars of conquest, expansion, aggression and retaliation became a feature of the Ghanaian experience,” she writes.

The slave ships continued to ply the African coastline many years after the 1807 abolition bill was passed in Britain’s parliament.

But after the slave ships left, it was not long before the Africa was divided up and colonised by European countries.

“The devastation left by the slave trade, and the absence of able-bodied people, made it easy for European powers to move in and colonise. Africa’s ability to defend itself was seriously compromised,” says Zagba Oyortey a Ghanaian cultural historian.

There has also been an impact on African culture.

To mark the 200th anniversary of the abolition of slavery, the South African musician Hugh Masekela, recently performed inside Elmina slave fort alongside musicians from Britain, the Caribbean and across Africa.

He says there is a need for African culture to be revived seeing as it was looked down upon and discouraged for so long.

“Africa is the only society which imitates other cultures. In other parts of the world culture is put at the forefront every day. But we only do it at ceremonies,” Masekela says.

Many young Ghanaians do not study their own history in any great depth as the subject is optional at secondary schools.

“The history of slavery should be taught in order for people to understand the effect it has had and continues to have,” says Elizabeth Ama Asare who has taught history at Accra’s Labone Secondary School for many years.

“Even today black people feel a bit suppressed when we come into contact with the whites and that is an effect of slave trade. It has put us in a second class position which shouldn’t be so.”