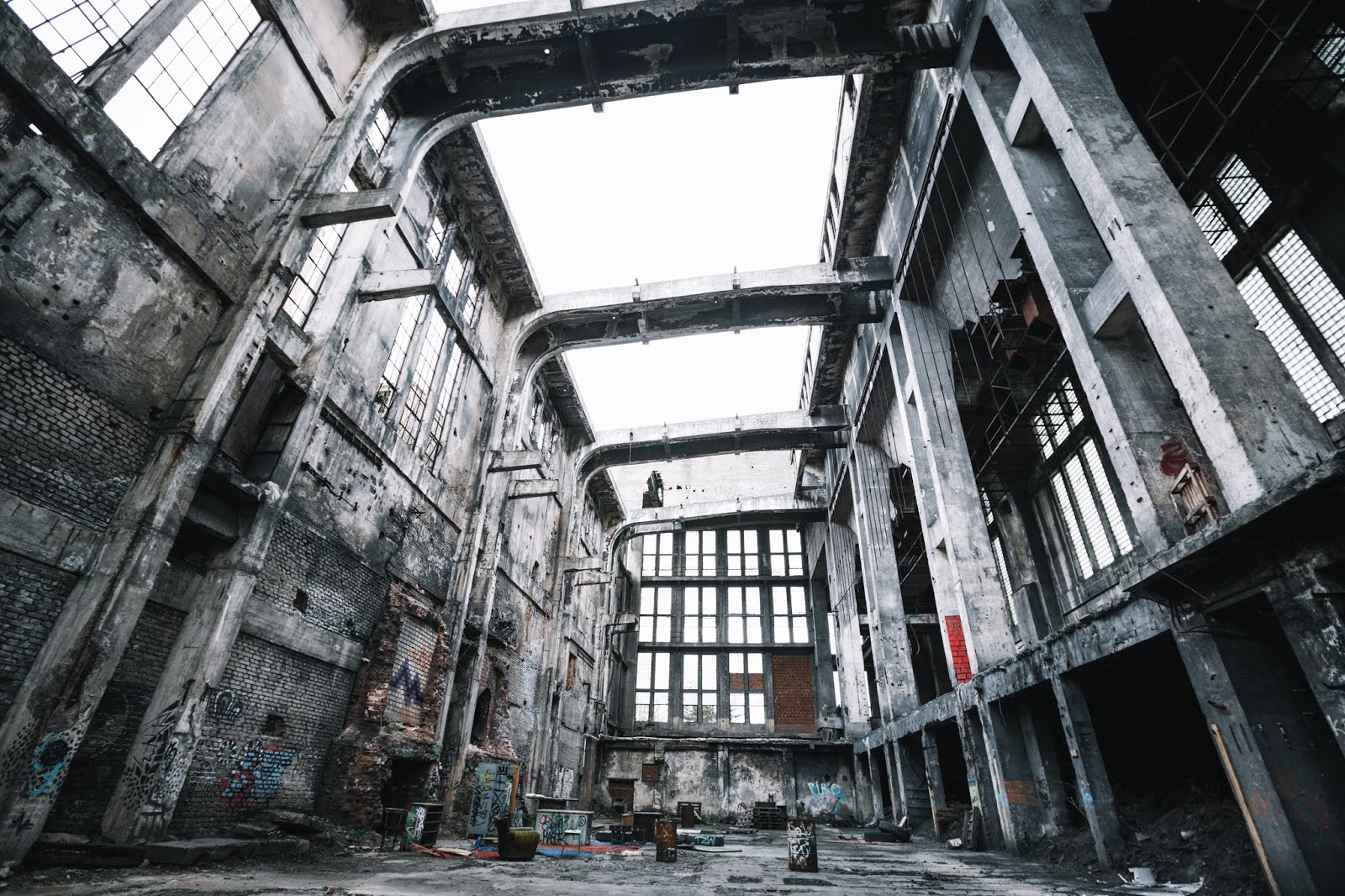 The gates are chained, the barbed-wire fencing stands,
An iron authority against the snow,
And this grey monument to common sense
Resists the weather. Fears of idle hands,
Of protest, men in league, and of the slow
Corrosion of their minds, still charge this fence.

Beyond, through broken windows one can see
Where the great presses paused between their strokes
And thus remain, in air suspended, caught
In the sure margin of eternity.
The cast-iron wheels have stopped; one counts the spokes
Which movement blurred, the struts inertia fought,

And estimates the loss of human power,
Experienced and slow, the loss of years,
The gradual decay of dignity.
Men lived within these foundries, hour by hour;
Nothing they forged outlived the rusted gears
Which might have served to grind their eulogy.

In An Abandoned Factory by Philip Levine, the poet strikingly portrays the factory with a sense of permanence and order, oppressiveness, inactivity, and excruciations. These are shown in the use of form, symbolism, continuous verbs, and precise dictions.

The poet portrays the factory with a sense of permanence and order. This is reflected in the use of form where the author has chosen to use three regular sestets mirroring the sense of order. Furthermore, the use of iambic pentameter creates a regularity to the pace of the poem and this is perhaps symbolic of the factory’s machines which too would have had a regularity in pace. In addition to this, the regular rhyme scheme further underpins this sense of continuity as it maintains a stable and symmetrical tone to the poem.

The poet manifests the oppressiveness of the factory. This is shown through the use of symbolism in the first stanza. In the first sentence, the factory is described as “chained” with “barb-wire fencing”, which sounds a lot like a prison. The pillars in front of the gate is an “iron authority” that “resists the weather”, just as guards of a prison that oversee everything. This symbolizes how the workers in the factory were being imprisoned intellectually, being drained from the continuous hard work. Moreover, the poet describes the fence as being charged by “the corrosion of their minds”. This refers to the loss of hope of the workers working in the factory, implying that their hopelessness fuels them to continue working. These symbols vividly show the situation of the workers that used to work in the factory and the oppressiveness of the factory.

The poet portrays the factory with inactivity. This is presented through the continuous use of verbs, as the poet walks into the inside of the factory. While describing the presses inside the factory, verbs like “paused”, “suspended”, “remain” are used, “stopped” and “blurred” are also used to illustrate the old iron wheels. This reflected that the factory was unchanged for a long time. Furthermore, the frequent uses of these verbs give a slow rhythm, often stopping readers, thus creating the atmosphere of inactivity in the abandoned factory.

As a conclusion, the poet portrays the factory with a sense of permanence and order, oppressiveness, inactivity, and excruciations. These are shown in the use of form, symbolism, continuous verbs, and precise dictions.

How does the short film "New Boy" engage readers?

How does the short film "New Boy" engage readers?