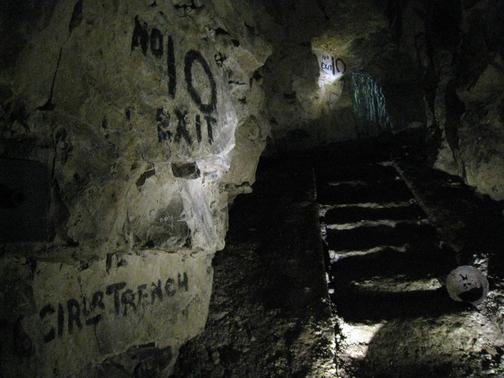 Groping along the tunnel, step by step,
He winked his prying torch with patching glare
From side to side, and sniffed the unwholesome air.

Tins, boxes, bottles, shapes too vague to know,
A mirror smashed, the mattress from a bed;
And he, exploring fifty feet below
The rosy gloom of battle overhead.

Tripping, he grabbed the wall; saw someone lie
Humped at his feet, half-hidden by a rug,
And stooped to give the sleeper’s arm a tug.
‘I’m looking for headquarters.’ No reply.
‘God blast your neck!’ (For days he’d had no sleep.)
‘Get up and guide me through this stinking place.’

Savage, he kicked a soft, unanswering heap,
And flashed his beam across the livid* face
Terribly glaring up, whose eyes yet wore
Agony dying hard ten days before;
And fists of fingers clutched a blackening wound.

Alone he staggered on until he found
Dawn’s ghost that filtered down a shafted stair
To the dazed, muttering creatures underground
Who hear the boom of shells in muffled sound.

At last, with sweat of horror in his hair,
He climbed through darkness to the twilight air,
Unloading hell behind him step by step.

In ‘The Rear-Guard’, how does the poet present his ideas about the soldier’s journey?

In ‘The Rear-Guard’, the poet presents his ideas about the soldier’s journey by using a complex rhyme scheme, foreshadowing, comparison and oxymoron.

Thirdly, another idea of the poet about the soldier’s journey is cruel. He compares by describing the scenes before and after the man being found dead, to show the cruelty of the soldier’s journey. This is shown by the difference in language. Before finding the man dead, the guard kicked the “soft, unanswering heap” savagely and flashed his beam onto the man’s face as he thought that the man was resting. However, the man wasn’t resting, and was “terribly glaring up, whose eyes yet wore” and “clutched a blackening wound”. Many details of the dead body of the man were described, showing a horrible scene. The comparison between what the guard thought of the man and how the man really was effectively shows the cruelty of the soldier’s journey.

As a conclusion, the poet shows that the soldier’s journey is unpredictable, tense, cruel but pleasant to the soldier by using a complex rhyme scheme, foreshadowing, comparison and oxymoron.

Language and Terminologies in Essays

Language and Terminologies in Essays