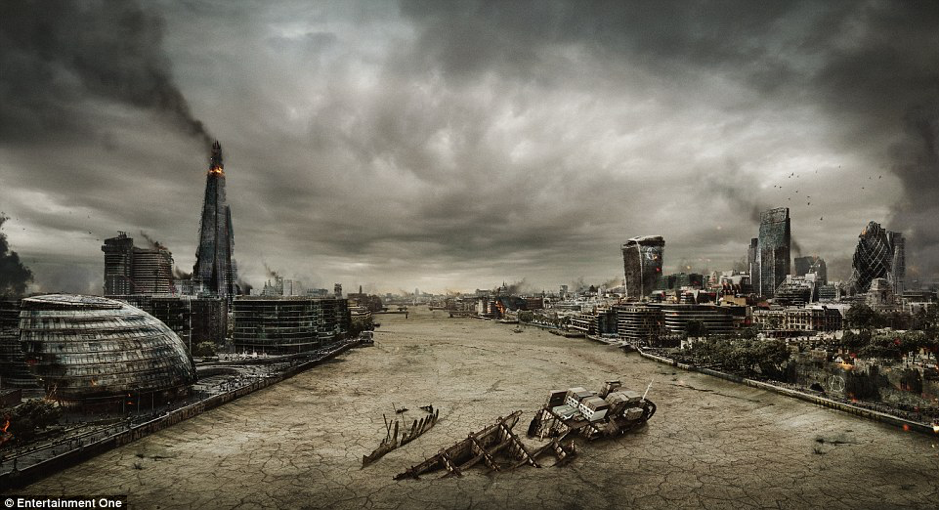 London was empty, silent and spooky. The dark sky was cloudy and foggy, shrouding London. The River Thames, as if drought-stricken, was filled with barren, parched soil instead of fresh and clear water. Right in the middle of the river was a cargo ship half-sank in the perfectly opaque soil, full of goods. The cargo ship was abandoned, its rusted components covered in a thick layer of ash. Remained in a tilted position, it seemed that the cargo ship was trying to get itself out from the cracks of the ground in its last moments.

The river extends to far away as if a humongous python with the smell of decay. On the left side of the river stood the City Hall. Its windows were covered in ashes and filth, some are even smashed, knocked off, cascading, completely without its magnificent impression when the City Hall was the headquarters of the Greater London Authority. Behind the City Hall is the Shard. Its four sharp, shiny edges were cracked as if the mane of a steed shaved here and there. On top of it, flame and smoke were licking the charred windows, engulfing them just as a fiery dragon and threatened to burn the great edifice from its inside. The smoke was then carried by the wind to the left side of the desolated, polluted sky. Right behind the Shard is the London Bridge. It has collapsed, as if centuries ago. The charming patterns and the lovely pink color on the side of the bridge were all gone. All that remained of the bridge was two of the three strong piers that had stood in the river since long ago in the late 20th century, and the snapped horizontal beam that could no longer stand the weight of vehicles. London was empty, silent and spooky, surrounded by an oppressive tone.